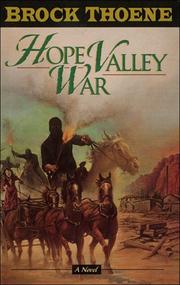 Ever notice at wine tastings, they always offer little cubes of cheese or bread to nibble on between the different varieties you are sampling? These are what are known as palate cleansers, and they help to make your taste buds ready for the next sip, and to give the flavor full advantage, (not that I get to go to wine tastings, here in my world in south Georgia, sometimes we have pork tastings…just kidding…sorta). Anyway, after reading such an intense multi book series as “The Mark of the Lion,” I wanted something to cleanse my reading buds. So at the most amazing used book store in the world, Books and More, a book shop run by a fellow named Jim Soos, I found this treasure for only $3.00.

Hope Valley War by Brock Thoene, a short 209 page tale of the Old West, circa late 1850’s. Published by Thomas Nelson Publishers, in 1997, Hope Valley War, opens in the town of Geona which was actually  part of the Utah territory. It was named after the birthplace of Christopher Columbus, (Genoa, Italy), and was the county seat of Carson County.

It’s the well woven tale of a man’s man named John Thorton. John returns home when he gets word that his brother Lucky had been hung by a lynch mob, leaving his wife Maria, young son George, and baby Maddie to fend for themselves, at the old sawmill that had once belonged to the both of them. John  is determined to find out what happened to his brother, and with the help of his hot headed, quick to shoot and ask questions later, younger brother Kit, they set out to unravel the puzzle.

It’s a great story of the Old West, in Louie Lamour style, but as always with a Thoene novel, the Lord is lifted up. Brock Thoene, is a phenomenal historical researcher, and also writes with his equally talented wife Brodie. An incredible team,  I have never read a Thoene book that did not impact my life in some way for the better.

One of my favorite parts of the novel, is where John is trailing one of the fellows, who can provide good information about his brothers fate, he finds him dying on the trail, because someone wanted to keep him quiet. As time is limited, John has to make a decision, to spend the man’s last breaths, answering his questions, or lead this dying man to Christ.   John does what we all should do, every day…lead those that are perishing to Jesus!

I really wish that of our nation could fall in love with these tales of the Old West once again. We have a generation of young men that don’t really know what it means to be a man. You have probably asked this question about America’s young people,”What ever happened to virtue?”

Did you know that the word “virtue” means “manliness?”

“Hope Valley War” is a fairly quick read, and takes you from start to finish, perched on the edge of your seat. Don’t miss this one, in your journey of books that can change lives.  Grab the young men of your youth group at church, and read a couple chapters to them in small group.

This entry was posted in fiction and tagged Thoene, westerns. Bookmark the permalink.