The Road by Cormac McCarthy

Posted on April 1, 2012 by theotherbrother 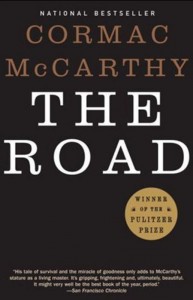 Here’s one that I picked up sort of as a “read between reads.” I must have bought it at a library sale, or something like that, as it was just on my overflowing bookshelf. I also have to admit that it is a little different than my usual fare.

It is a post  apocalyptic story about a father and son trying to survive on an earth (or at least in America,) that is no more.  Just a burned up,  gray cold, nothing.  Animals are mostly gone, and people have been reduced to basic survival.  Its a little boy’s search for “The good guys.” He is of course learning what they look like, and consequently how to find them, first within his dad.

They scavenge food, they push a shopping cart full of whatever will help keep them alive. and do what they have to.  It is sad, desolate, and one of the most depressing books I have ever read. I wondered if I should have put it in my mind. In this passage, the father is talking to his son, after he has steered him away from one of the many grizzly sights they will encounter:

“Just remember, that things you put into your head are there forever.” “You might want to think about that.”

“You forget some things, don’t you?” asks the boy.

There are many of these type of conversations between them. These moments of dialogue and interaction between the father and son are really what this book is about. I can almost compare it to the intent that was meant by the father in the old Shel Silverstein song, “A Boy Named Sue.”  In this song the father had given his son a name that would naturally create obstacles for him, so he would grow up able to take care of himself. In the book, “The Road” the father is painting his son like a canvas, to prepare him for the day that he will have to make his own way.

By in all, the story is probably the most accurate imagining of the end of the world I have ever read. There are no real heros…just survivors.

As a follower of Jesus Christ, this book reminded me of the type of world that will follow the Rapture, or the day He appears in the clouds and calls His Church home. It was like the fullness of the curse has come upon the earth. Whether or not this resembles that time, it still made me very grateful that He found me when He did.

It was also a Pulitzer prize winner too.  Published by Random House, an a very easy read.  It was 287 pages long.

I have to say again, that this is a more realistic depiction of the world after man has had his way, than you’ll ever get from a “Bruce Willis” movie.  The film, “The Road” came out in 2009 and has a good host of stars. I’d like to see this one, but I’m sure it won’t compare with the book…they never do do they?

If you are in the mood to be moved read this one. It won’t take long, but it might be a little disturbing in some places…