The SNOWBALL by Alice Schroeder 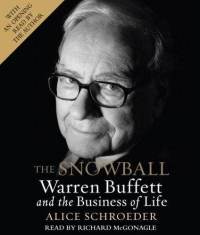 The full title of this work is; The Snowball Warren Buffet and the Business of Life. This book was  a little deviation from my usual and preferred fare in a couple of ways. It’s not a fiction, (of which my preference is Christian fiction), and it is an audio book.

How I happened upon it was that it was for sale at our local library, and for $.50 I just couldn’t pass up this opportunity to learn a little about this man that I had for years heard and read so much about. The name Warren Buffet was always in my mind,’ synonymous with “success” or “riches.” I remember one day years ago sitting in a steam room, trying to read a leftover and very soggy Wall Street Journal, and seeing the head line, “Buffet Plays with Trains.” I then found out it was railroad investments. Pretty neat I thought.

This was an eight CD compilation, and it took awhile to get through, but it was well worth it.  It is really Warren Buffet’s memoirs, and it seems that this, “Oracle of Omaha” allowed, (or commissioned I bet,) Alice Schroeder who was a Wall Street analyst and a director at Morgan Stanley to write it for him.  This audio book version was read aloud by Richard McGonagle, a voice actor. You’ll also recognize his voice from secondary roles in TV shows like The Practice, 3rd Rock from the Sun, and voice role in the Nickelodeon cartoon, “Avatar, The Last Air Bender”. He has a great voice to listen to, and he does a pretty convincing impression of Warren Buffet throughout the book.

The book itself is pretty much what you would expect. It’s the memoirs of a fellow who started out pretty much like most people, and what influences shaped him into becoming one of the most well known and richest fellows in the world.  If you are listening to glean great wisdom for yourself, as far as your personal wealth goes, you will be disappointed, it really doesn’t go there, (aside from a few words of wisdom and Buffet philosophies,) I was surprised at the frankness and it appeared to be a pretty honest portrayal of what you would expect.

The writer Alice Schroeder did a nice job, and together she and Warren Buffet were able to preserve the reputation that he has spent his whole life building and protecting.  You will learn many Buffet trivia snippets, and it will not be a waste of time to listen to.

What it did for me, is to endear Warren Buffet the person to me alittle more, so now when I see him in the paper, I feel like it is someone that I know.

If you like to listen to audio books you enjoy this life story of Warren Buffett.

This entry was posted in nonfiction. Bookmark the permalink.