The Scarlet Plague by Jack London 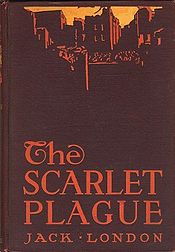 I get this very strange newsletter, called “The Advent of Deception.” It is very unique, and definitely gives food for thought with regard to these Last Days. In one of the posts, it talked about a very short book written by Jack London in 1912, called, “The Scarlet Plague.”  It caught my eye because my grandfather, Frank Phillips, (he passed away a long time ago,) was a real Jack London fan. I had never read Jack London, but this being such a short read, I thought I would give it a shot. It was really a good investment of my time, which seems to be in such limited supply these days.

The story is set in the future, around 2073, and is about old man, and his grandsons, and how he is trying to impart wisdom to them.  Granser, (which is actually a now considered an obsolete word) is Jack Howard Smith, a former college English professor, who was one of a handful of survivors of  the “Red Death” or “The Scarlet Plague” that beseeched the earth in the year 2013.

Granser tells the story of how the plague came about, to his grandsons, and the devastation it caused. He is the only connection they will ever have to the world that once was. What I found incredible, was as “Grandser” was relating the events of  2013, he was describing the world at the time.

“It was the summer of 2013 that the Plague came. I was twenty-seven years old, and well do I remember it, Wireless dispatches. “We talked through the air in those days, thousands and thousands of miles. and the word came of a strange disease that had broken out in New York.”

This was the very thing that the website “Advent of Deception” had pointed out.  How could Jack London have known (in 1912 mind you) that we would have “wireless” ways to communicate? He was describing cell phones!

As he spoke to his grandsons, he talked about things like flying machines that would go 200 miles an hour, and a world of 8 billion people.  It was reported there was only about 1.6 billion people in the world in 1912.  As of my post today according to the world popluation clock  today, May 25, 2012 there are 7,015,731,125 people in the world. You can see it here at http://www.census.gov/main/www/popclock.html

For my first Jack London book, it was really a rewarding experience. Just like the Bible tells us in the Book of Jeremiah Chapter 6 verse 16:

Thus saith the LORD, Stand ye in the ways, and see, and ask for the old paths, where is the good way, and walk therein, and ye shall find rest for your souls. But they said, We will not walk therein.”

It pays for us to look to the old ways.  I know the above verse is in a different context, but good advice none the less…never neglect the old paths.

And don’t neglect to read Jack London. You will enjoy him.