The Robe by Lloyd C. Douglas

Posted on November 3, 2012 by theotherbrother 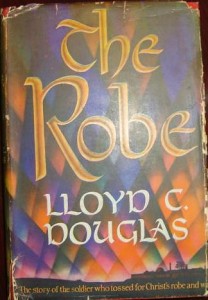 What a wonderful journey I have just been on. The Robe was published originally in 1942,  my copy is the “thirty-fifth impression, August 1944, and it is a little worn, as it should be.  I came across it, in my grandparents house, now empty after my grandmother passed away. You know how the family goes through all the belongings, taking mementos that mean something to them? For me, it was the books, especially those of my beloved grandfather, Dave Burns. Gosh, I sure loved him.  So, here I have carried this particular book from home to home with me ever since, having seen the movie years ago, but never reading it completely…until now.

The Robe, is the story of the  somewhat free spirited Roman Tribune,  Marcellus Gallio who was the commander in charge of the crucifixion of our Lord Jesus, in Jerusalem that day. He also was the soldier who won the toss,  as they gambled for His robe.  Prior to this, Marcellus had fallen out of favor with another official, Prince Gaius, and had been sent as a punishment to the Roman version of Siberia, Minoa, and it is there that he has to prove himself a leader. His faithful slave Demetrious accompanied him. What ensues, is the tale of these two men, woven as only Lloyd C. Douglas can, about the incredible power of Christ, and how He changes hearts, making men free. It is an expert eye witness account of what may have happened, and it is told in a way that will whisk you away from whatever world you hail, and into ancient Palestine, one which you will not want to return from.

Here is a passage from this glorious book that takes place on Golgotha. Tribune Marcellus has won the Robe , and given it to his slave Demetrius for keeping, while he finishes his duties at the crucifixion. The scene is on Jesus :

“Now the dying Galilean was looking down upon the crowd below him. His lips moved. His eyes surveyed the people with the same sorrow they had expressed on the road when the multitude had hailed him as their king. There was another savage burst of thunder. The darkness deepened.  Demetrius rolled up the Robe and thrust it inside his tunic pressing it tightly under his arm The intimate touch of the garment relieved his feeling of desolation. He wondered if Marcellus might not let him keep the Robe. It would be a comfort to own something that this courageous man had worn. He would cherish it as a priceless inheritance. It would have been a great experience, he felt, to have known this man; to have learned the nature of his mind. Now that there would be no opportunity to share his friendship, it would be an enduring consolation to possess his Robe.”

How could Demetrius and Marcellus know the wondrous journey that this simple carpenter’s garment would carry them on? Nor do you my friend, know where it will carry you, if you will take the moment of a mere blink of eternity and read this immortal work.

This book truly buried me in longing, as I felt as if I became, and you will also, both Marcellus and Demetrius as I feasted upon it. Please, please, get a copy of The Robe, by Lloyd C. Douglas.

One last comment.  I had to know who the woman that Mr. Douglas dedicated this classic to was. It was in the preface, “Dedicated with appreciation to Hazel McCann who wondered what became of The Robe.  Well, a brief web search of her name led me to a Wikipedia article that stated that she was a department store clerk in Ohio, who had written a letter to Mr. Douglas.  Her letter queried him as to what he thought might have happened to the Robe that the soldiers had gambled for that fateful day. This was his answer to this sweet lady. Thank you Ms. McCann from the bottom of my heart for writing that letter to Mr. Douglas! You have blessed untold millions! And thank you PawPaw for choosing such good books as well!