The Silver Chalice by Thomas B. Costain

Posted on December 14, 2012 by theotherbrother 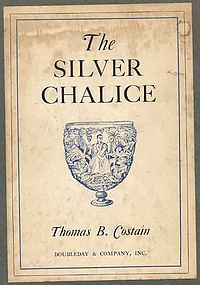 Can a book also be a cherished memory? I believe so, as this volume, “The Silver Chalice,” by Thomas B. Costain, is so much more than a good read to me. It is a life long companion, a memory, much like a beloved quilt made by an endearing great-grandmother.  This book is keeper of the memories of my childhood, and the first recollection I have of ever seeing it, was on the bookshelf at my grandparents home in Huntington, WV, back in the mid 60’s. I remember standing at the wooden shelf, that hung over the black and white television console, in the little house on Twenty-First Street, on a day when there was nothing on the three or so channels they received, bored, and looking for something to do. I turned and asked my grandfather, David E. Burns, “Paw-Paw, what is this book,’The Silver Chalice’ about? He replied, “You should read that one someday, Sport. It’s a good one.”  Now about 48 years later, I have taken his advice. Oh I picked it up that day, and think I even glanced through a few pages, but undoubtedly, some other exciting activity caught me up, and I put it back on the shelf.

When my grandmother passed, (my grandfather departed this side of Heaven first), and as our family gathered at the house to secure our memory  treasures, there it was again,  “The Silver Chalice” by Thomas B. Costain.  I picked it up, opened it to the middle of it’s 533 now yellowing pages, and there I was engulfed in the odors of my childhood. That faint, but memory drenching smell of years of tobacco pleasure, that my grandparents home held, was now teasing my senses, lulling me back to that day. “You should read that one someday, Sport…” echoed once in again in the ears of my longing.  I took the book home, and carried it among my travels, until November, 2012, a scant 70 years after it’s publication in July of 1952, by Doubleday and Company.  Finally, “SOMEDAY,”  had arrived.

The Silver Chalice is a wonderful “what if” tale.  It is the inspired account of the journey and life of a young silversmith that was enlisted by Luke the Physician for  Joseph of Arimathea to make a silver holder, a chalice to contain and protect the cup that our Lord Jesus used at the last Supper. It is set in Israel, as well as other parts of Greece and Rome.

In the beginning we meet the richest man in Antioch, Ignatius, a dealer in olive oil. But, alas,  he has no sons, none to pass his wisdom and fortune to.  A custom of that day was, that one could buy and adopt a son. This could prove a great opportunity for a young man, and such a boy was the son of Theron, the poor seller of ink and pens, who had three sons and a wife he could barely support. A bargain was struck and so Basil, the young boy full of artistic promise, becomes the son of Ignatius. It is here that that story truly begins.

Upon Ignatius death, Basil is robbed of his inheritance by lies and fraud of Linus, the brother of his adopted father, and is sold into slavery. For some time he remained under cruel and unappreciative owners, all the while honing his skill as a master silversmith. Then, he captures the attention of Luke the apostle, who is searching for an artist for Joseph of Arimathea, for a very important commission. This task is to fashion, a worthy holder for the very cup from which Jesus himself did drink, at the Last Supper. He must conceive and to create a chalice that bears the images of the 11 faithful apostles and Jesus himself. He will have to face an arduous  journey to seek out all the apostles, capture their likeness, and somehow accomplish the seemingly impossible , to capture the likeness of the face of Jesus.

Though many tears have marked these pages, as I sat and read it on my bench through a month of lunch hours, a passage has emerged as one of significant remembrance for me. It’s setting is where Basil has arrived at the Inn of Hannibal in Ephesus, and after having seen the apostle John. He awakens early but finds the servant of the inn, Cephas, is already at the table of the common room, preparing the first meal of the day. When he inquires of the reason that Cephas has risen so early, his reply, on page 364, is:

“As you grow older, my young friend, you have less need of sleep. I am satisfied with a few hours and then I rouse and lie in the darkness. I think of all the things I have done in life that I should not have done.  I think” – he hesitated and sighed – “of the times when I have failed, when my courage did not rise to meet an occasion. I find myself longing for the dawn. I do not find the need to rise early a hardship.” His eyes took on a faraway look. “My son, it is a compensation of age that you can be sure the dawn is near at hand.”

When my grandfather said to me, all those years ago, “You should read that someday, Sport.” little did I know what it would truly mean to me now.  In my stumbling, and failure laden journey through my life, I suppose that because of the many I have disappointed, the many I have let down, I too rise early each day. I am looking forward to the dawn as well, as old Cephas so aptly shared. And, in my travels, I am too searching for the face of my Lord.

Thanks again Paw-Paw and Grammy for your love and gifts to me. I love you still.