Posted on February 3, 2013 by theotherbrother

This one is another one of my ten cent specials, courtesy of my favorite haunt, (what a word…haunt is), which is my local library. All I can say is “diamonds strewn along the curb,” but nobody else must see them, because I seem to find them every time I look on the “Books for Sale” shelf. I found a real gem here, Ironweed by William Kennedy.  I wish I had an interesting story to share as to the reason I read it, but it was only that it looked interesting, and it said “Winner of the Pulitzer Prize.” To be honest, like most people, I’ve heard about the Pulitzer Prize all my life, but never took the time to learn what exactly it is. I just figured it was a pretty prestigious award for good writing.  So, I pulled ten coppers from my change purse, and plunked them down, and that’s all it cost me to acquire this prize winner!

Ironweed is the story of a homeless fellow named Francis Phelan an ex-professional baseball player, who originally left his wife, and his life in Albany, NY, after he accidentally dropped his infant son Gerald, killing him, while possibly drunk.  If focuses on his 1938 return to Albany, and with him are the memories and (and sad hallucinations), of three others that he has killed in his life.  It is just what I said, the story of a homeless man, his companions, and his sojourn on the street, most of all trying to live with himself.  It regularly branches off into the lives of the others that are tied to Francis, but it always returns to him.  Francis is trying to find peace.

By the way, the book is titled after a plant, Tall Ironweed. It’s actually a member of the Sunflower family, and named such because of it’s tough and very strong  stem.

William Kennedy, the author, was born and raised Catholic in Albany, NY. This accounts to me of the confession, redemption, nature of this book. I also think he is a very good writer, and pens scenes like I have yet to read of another. In this early part of the book, Francis has just finished some soup at the Mission of Holy Redemption, and was leaving to wander the streets. He spies Sandra, a pitiful  woman that he propped up against the building earlier in the evening. She was drunk, and the mission would not allow anyone in who was drunk…

“Francis, wearing his new socks, was first out of the mission,  first to cast an anxious glance around the corner of the building at Sandra, who sat propped where he had left her, her eyes sewn as tightly closed by the darkness as the eyes of a diurnal bird.  Francis touched her firmly with a finger and she moved, but without opening her eyes. He looked up at the full moon, a liver cinder illuminating this night for bleeding women and frothing madmen, and which warmed him with the enormous shadow it thrust forward in his own path. When Sandra moved he leaned over and put the back of his hand against her cheek and felt the ice of her flesh.”

Ironweed will not leave you feeling good about yourself, nor will you be overwhelmed with pity. You may be shocked and repulsed at times, (as I was), but you can be sure that you will know something more about yourself after you read it, that you didn’t know before.  William Kennedy really opens his readers to the world of the hopeless homeless. You will not enjoy this journey as you walk with Francis , but it is a walk that will change you.  Ironweed is a 227 page paperback published by Viking Press in 1983.  I can’t say it was the most enjoyable book I have ever read, and the language, (and the imagery),  gets very rough in some places, so it’s no bedtime story for the kids.   As a Christian, I struggle sometimes, and have thrown books away, when they seemed to go in a direction that I thought was unnecessarily raunchy, (like M. Scott Peck’s book, “A Bed by the Window”), but the adult allusions to the unmentionable side of the homeless plight in this book were well fitted to show a side of humanity that most of us know very little about.  It is painful to know what some human beings have to go through in this walk through life. I prayed after reading this book, that I might have a bigger heart for those who have fallen down along the road.

I believe there is a Francis Phelan in all of our lives.  Maybe that’s what made it a Pulitzer Prize winner.  It was a worthy book, tough in moments, but worthy.

Lord Jesus,  thank you for my life, my home, and my family. I see their value even more now.

Interesting fact. The photo of the man on the cover is actually the picture of an poor unknown Tupelo Mississippi farmer, originally photographed by Margaret Bourke-White, part of 1937  work, “Have You Seen Their Faces?” by Erskine Caldwell and Margaret. It is a book about the poverty of the sharecropper of the south. 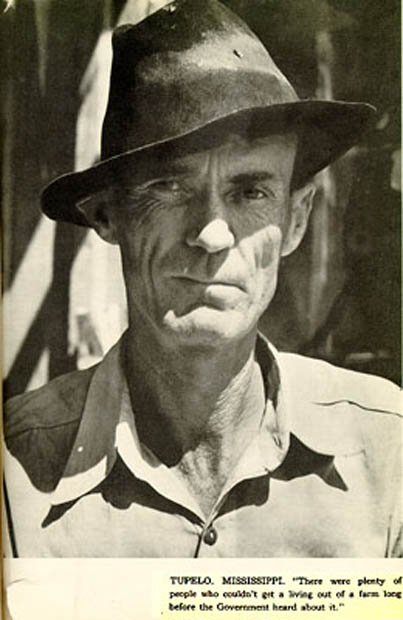 The caption reads: “There were plenty of people who couldn’t get a living out of a farm long before the Government heard about it”.

I wonder who he was?