The Dedicated by Willa Gibbs

Posted on February 23, 2013 by theotherbrother 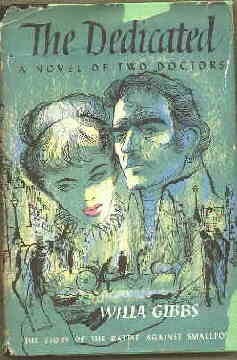 In perusing the “For Sale” shelf at my local library, where you can always find me at noon just about every Wednesday, I noticed this one, “The Dedicated” by Willa Gibbs.  When I read inside the front cover, it had additional title, which had been employed when it was first published in England.  “A Novel Of Two Doctors,” and I learned that it was the story of the incredible battle against smallpox in London during the 1700’s.

At twenty-five cents, I knew I was holding a real bargain.

This short 224 page masterpiece, was gripping from it’s introductory prologue, which brings you in during “the year of Bonaparte’s ascension to power in France,” to finally, an author’s note by Willa Gibbs, that rewards you with the understanding that what you just read is true, and that you are better for having read it.  “The Dedicated” is a fictionalized account of the battles that were faced by Doctor Edward Jenner, and his cowpox vaccine that  saved England, France and  mankind from the mortal foe, smallpox.

You are first introduced to Jeremy Sterns, the owner of a popular news journal of London, The Postboy. A battle for his support is waged by Dr. William Woodville, scholar, and prominent physician,  and his attractive and charming sister Marion, who easily employs her wiles on behalf of her brother. William is the champion of innoculation, that is introducing the virus to a person, then allowing it to take it’s course under careful care and quarentine. The only problem was that the person innoculated would still be contagious during recuperation, and it was very expensive in cost and time only available to those who could afford the price.

On the other side of this dilemma was Dr. Edward Jenner, a simple country physician, who tends “the aches and pains of country folk,” as well as their animals. He years ago, noticed that cows came down with a non fatal disease that resembled smallpox, “cowpox” and when this disease was introduced into the bloodstream of human beings, then they became immune to smallpox.

One thing that  excites me  about books that are written prior to the 1960’s is the eloquence of the writing. Here is a passage to illustrate what I mean.  Jeremy Sterns, has been taken to jail for reasons he didn’t know, and who would show up as his rescuer, but none other than Marion Woodville. The following is their first meeting…

“His keen ears caught a sound of movement. Jeremy swung around, falling naturally into a pose of aggressive defense. He was just in time to observe a young woman rising gracefully from a low couch. Astonished, he dropped his hands, the links of the chain clashing. She moved toward him in a gliding walk. “Regal” was the word that leaped to his mind. A queen might have profited by imitating that graceful, self-assured carriage. Her small head, capped with dark curls through which a jeweled ribbon aimlessly wandered, was like some exquisite flower above the long-throated white neck, pearl-like and translucent. She was wearing a demi-habiliment of white muslin with crimson velvet points, definitely expensive.”

In this book, published by William Morrow & Company, in New York, you will be treated to passage after passage of excellent writing. And when finished you will know more about the story of smallpox, then most, as well as having developed an affection and appreciation  for good old country doctors.

Another interesting thing I found was that the cover sleeve picture was illustrated by Irving Seidmont Docktor  and artist and educator best known for his work as a book and magazine illustrator in the 1950s and 1960s.

You can learn more about him here, a very interesting individual as well :http://en.wikipedia.org/wiki/Irv_Docktor

To sum up,  “The Dedicated,” was a book about the struggle to bring truth to mankind. The truth of a cure for a devastating condition, that robbed men of hope, and their lives.  What I find amazing is how it mirrors a greater struggle, of this kind. The struggle to bring the Truth of Christ to a world infected with the devastating condition of Sin. The greatest obstacle to this is also pride, for just as Dr. Woodville was not willing to even let the true cure stand in the way of his desire to be applauded,  how often does pride keep one from coming to the knowledge that they don’t have the ability to save themselves? Sin like smallpox can only be defeated by vaccination of the Blood of  One, who took the condition on and destroyed it.

If you get the chance someday, read “The Dedicated” by Willa Gibbs. You will enjoy the journey.