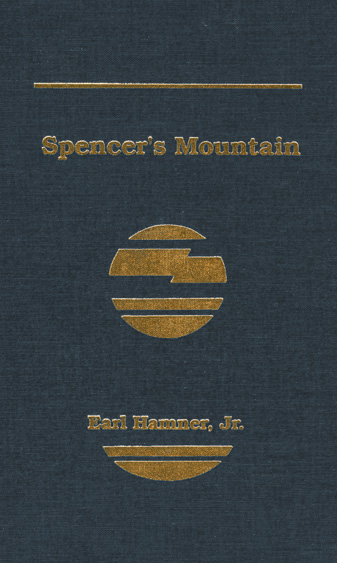 Strolling down the “Books for Sale” shelves at my local library, (one of my all time favorite past times), I came across this incredible find, “Spencer’s Mountain” by Earl Hamner, Jr.  Published in 1961, this 247 page masterpiece was written by Earl Hamner Jr.  The book is based on Earl’s own childhood experiences in the Blue Ridge mountains of Virginia, (and I have to confess that I found reading about this author’s life, was just about as interesting as  any book I have ever read. Earl Hamner Jr. was a pretty amazing fellow.)

“Spencer’s Mountain” begins, “On the day before Thanksgiving the Spencer clan began to gather.  It was a custom that at this time during the year the nine sons would come together in New Dominion. On Thanksgiving Eve they would celebrate their reunion with food and drink and talk. On the day itself the men would leave at dawn to hunt for deer.”

It almost sounds like the beginning narration of a weekly “The Waltons.” By all rights it should, as “The Waltons”was an Emmy awarding winning television series that was created by none other than this incredible man, Earl Hamner Jr. (He was even the narrator  for each episode.) Actually, the Waltons was based on Earl’s next “Spencer” novel, “The Homecoming, a novel about Spencer’s Mountain.” written in 1970 and from this the tv series was birthed.

Because I was such a fan of the Waltons, reading “Spencer’s Mountain, was like one big “Waltons” episode for me. It is the story of a family, and their lives in the depression era. It had a “Grapes of Wrath” type of feel to it, and the writer has a way of transporting you into the story.  Unfortunately, one downside was that as I read it, I saw the characters from the Waltons, some even shared the same names. Interestingly, “Johnboy” was really “Clayboy” in the book, his dad being, of course, “Clay Spencer” instead of “John Walton.”  After I got this adjusted in my brain, the book flowed wonderfully.

It took me several lunch hours at work to read this book, (I am an accounts receivable manager by day, and a gospel bluegrass banjo player by night,) however being honest, I couldn’t wait to get out to my favorite bench, to “head for the mountain.” There were so many passages which illustrated the wonder of this novel, it has been hard to select a favorite, but here goes…

In this passage, Zebulon, the grandfather of the clan, has been accidentally and tragically crushed by a tree that Clay and Clayboy were cutting down. His wife, Eliza is at his side, holding his hand as he is leaving this world:

“When life ebbed away, when the blood no longer made its spasmodic voyage through the hand she held, she looked at his face. The fierce of beautiful visage relaxed, and something not quite a smile, but akin to it, took its place, a waxed artificial slack expression that was neither pain, nor joy but was simply death.
Something she could not name rose from forgotten wells and the old woman remembered her husband in the vigor of his youth.  He had been a man to be proud of and the tears that fell from her old eyes were the tears of a young girl.”

I am so glad to have read this book, and learned about the man that wrote it.  One additional bit of trivia I enjoyed learning was that Earl Hamner Jr. the author, also wrote for “The Twilight Zone.” His first episode for it, is also by many, considered the best, and it is entitled, “The Hunt,” about an old mountain fellow who dies and is walking the road to that leads either to Heaven or Hell with his faithful blue tick hound at his side.  Although it really wasn’t Biblically accurate, it has still been one of my favorite episodes, because, as the summation at end (narrated by Rod Sterling,) states, “A man will walk into Hell with both eyes open, but even the Devil can’t fool a dog.”

This is a sad but true statement. I know that in my own walk, without my Bible,  my church The First Assembly of God, and my beloved pastor Winston Baker, I would be easily fooled too. I’m definitely not the sharpest pencil in the box. The best way not to be fooled is by making sure that you find yourself in a church that preaches from God’s Word. By the way, I also believe that little country churches are the best by far! It’s hard to imagine that love can be taught by a pastor who heads a congregation so large that he doesn’t even know the names of his sheep.

Speaking of names, another interesting tidbit, is the name “Spencer Mountain,” came from the maiden name of Earl’s grandmother,  Susan Henry “Spencer” Hamner. He had a habit of using family names in putting titles to his projects.

In your life list of books to be read, be sure to add “Spencer’s Mountain,” by Earl Hamner Jr. You will really enjoy it!