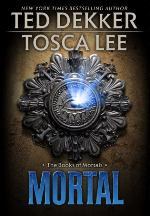 I’ve been reading the Christian fiction author Ted Dekker  for a long time. My wonderful bibliophile friend Leslie at the YMCA, introduced him to me several years ago, so when she recommended his latest series, a trilogy, “The Books of Mortals,” I leapt at the chance to read them. I had just finished Dekker’s “The Circle Trilogy,” and was ready to get back into his world again.  This series begins with the first book called “Forbidden,” which I read before I began my book review site, in 2011. In June of 2012, “Mortal,” came out, but I have just now had the chance to read it. It’s book 2 in the series, and Book 3 will be “Sovereign,” which will be out this summer. I can’t wait.

So when you get ready to have your eyes truly opened, and understand what being a Christian is from a perspective that you have never dreamed of, then please plan to read “The Books of Mortals,” series.  I will give you this tidbit too, the series actually has a short story prequel that is free to download.  One place you can get it is here (you will have to set up an account but these days you have to do that everywhere):

This will set the scene for “Forbidden.” This first book of the trilogy, begins with a civilization of perfect peace, no diseases, and a perfect world order…and no passion, no emotion, except fear. It has been engineered through alchemy, genetically created, resulting in every living soul on earth, actually being dead. Then Rom Sebastian acquires a mysterious  vial of ancient blood with an obscure message, and brings himself back to Life. He begins the journey of bringing this Life to a dead humanity again, as well as….(you will have to read it, but do read the prequel “The Keeper” if you can, as it will explain much.)

In this, the second book of the series, “Mortal” many others have joined Rom Sebastian in life, but now “The Order” has created an army to destroy forever those who are truly alive. The final hope for humanity rests on a Sovereign leader, Jonathan, who will become 18 years old in a matter of days, and he is the hope of the living. But the army of “Dark Bloods” that are lead by control and power crazed Saric, who is determined to become ruler, will stop at nothing to destroy any who oppose him.

Study to shew thyself approved unto God, a workman that needeth not to be ashamed, rightly dividing the word of truth.- 2 Timothy 2:15 KJV.

What I love about Dekker’s and Lee’s books is not that they are gripping and intense reading, although they are, nor is it the great writing. It’s the fact that I’ve grown in my understanding of myself, and my relationship to my Savior, and others when I finish them. Their books are the best fictional allegories to the Kingdom of Heaven, and the life of being a true follower of Christ that I have ever read.

What does it mean to, “Study to shew thyself approved?” how do we rightly “divide the word of Truth?” I believe it means to look for every avenue to understand what Christ is really saying to us today, where He is and how to serve Him. To divide this Truth will take a two edged sword. I also believe that this is the true mission of Ted Dekker and Tosca Lee in this series, as they use the power of fiction to impart the Truth, and help to form the mind of Christ in us, (as in the fashion of a true “John the Baptist” pastor.)  When they someday stand before our Lord, He won’t ask them how many books they sold, He will ask “How many eyes were opened?” Then He will joyfully tell them, and usher them into His Kingdom. I believe this, because I know that have helped to open one set of eyes for sure….mine.

Please, don’t miss the chance to awaken…read “The Books of Mortals,” prequel “The Keepers,” “Forbidden,” “Mortal,” and soon to come out “Sovereign.”