The Twisted Thing by Mickey Spillane 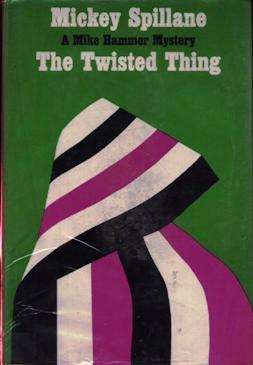 On one of my regular visits to the “for sale,” shelves of my local library, I came across a real gem. It was a book by Mickey Spillane.  I had heard of Mickey Spillane, but never read any of his works. I knew he wrote crime and detective novels, but never having had read this genre,  I didn’t really know what to expect. I thought, “Shoot, for $.25 why not give it a try?” So I reached for it, and when I picked it up, and opened it I found that it was an autographed copy!  And, it was a first edition, to boot!  That in itself made it incredibly exciting. It wasn’t in very good shape to be honest, a little worn, and the book jacket was missing. But, other than this it was quite an exciting find!

The first thing I did when I got back to my computer, was to look and see whether or not it was a genuine autograph. I searched it, and to my pleasant surprise, it certainly matched the style of the others that I saw.  This was a great find!!! I sure love my library!!! 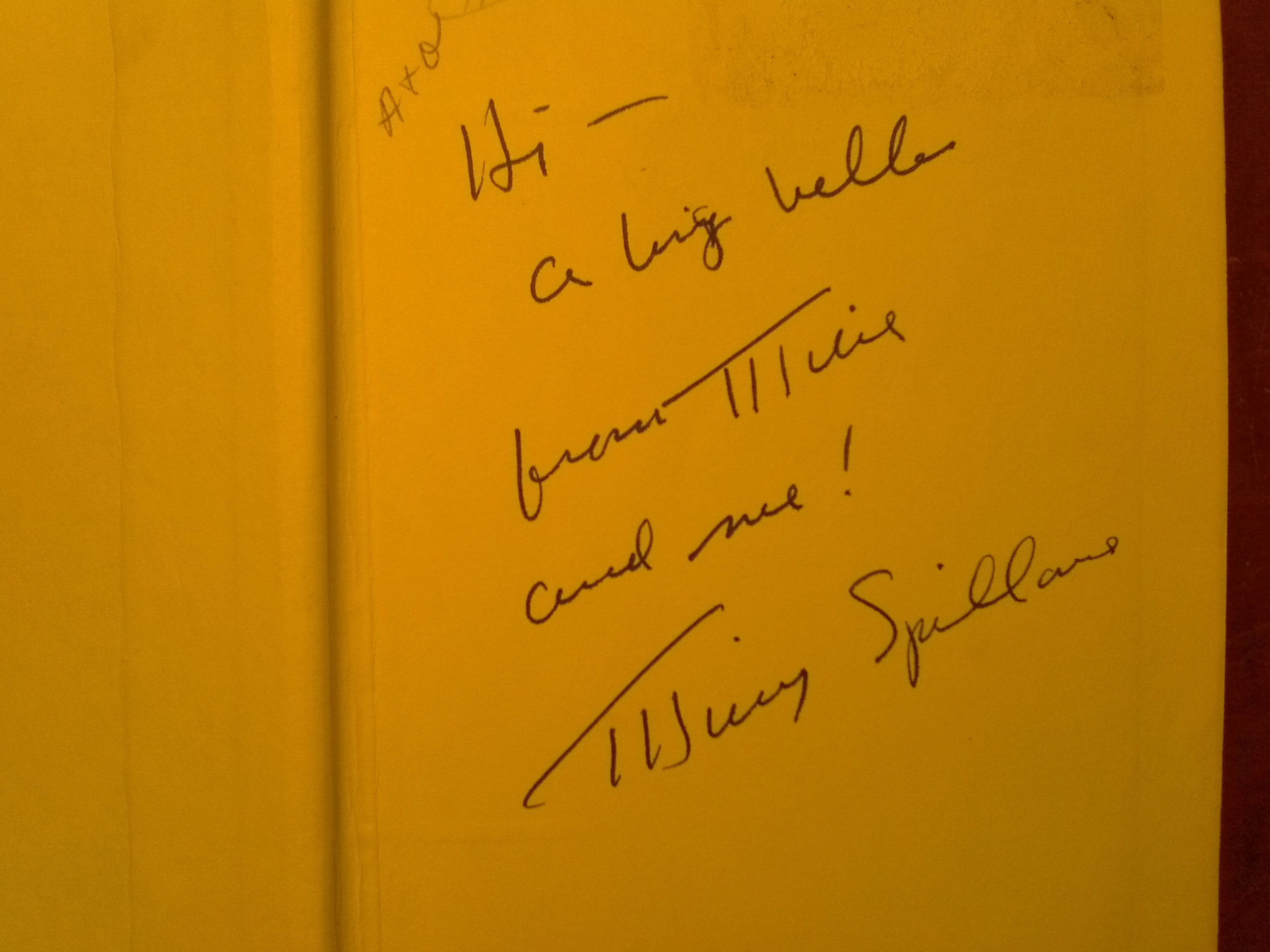 “Hi- A big hello from Mike and me! Mickey Spillane”

This book, “The Twisted Thing,” by Mickey Spillane, was published in 1966 by E.P.Dutton & Company, Inc. It’s 219 pages, and it’s one of his signature “Mike Hammer” series.  It is a very well written, “Who done it,” where private investigator Mike Hammer takes on a case to solve the case of the kidnapping of the very gifted son of a prominent and wealthy scientist, Rudolph York. However, finding the fourteen year old, boy genius, Ruston York proves no challenge, but when Mr. York is found murdered, in the apartment of his trusted lab assistant, then he really has a case on his hands. Mike finds that he has become one of the prime suspects!

This book is definitely not one for the kids however. That was the only disappointment for me.  I don’t lean toward books or writers that feel like they have provide intimate details regarding the romance portions in their works, and although more tastefully offered in this book than most non-Christian authors of today, (“You will know them by their fruits.” Matt 7:16,) Mr. Spillane is no exception.  I can sure see why he was so popular as a writer, because aside from this aspect of his work, he really knows how to bring a reader into the action. I enjoyed his command of the craft.

In this brief excerpt, Mike Hammer has just arrived at the residence of Mr. York, and has asked a reluctant doorman to see him, “And right away.”

” I guess I might as well have told him I wanted a ransom payment right then the way he looked at me. I’ve been taken for a lot of things in my life, but this was the first for a snatch artist. He started to stutter, swallowed, then waved his hand in the general direction of the living room. I followed him in.

Have you ever seen a pack of alley cats all set up for a midnight brawl when something interrupts them? The spin on a dime withe the hair still up their backs and watch the intruder through hostile eye slits as though they were ready to tear  him so they could continue their own fight. An intense, watchful stare of mutual hate and fear.

If you are interested in Mickey Spillane, then check out this article on Wikipedia:   http://en.wikipedia.org/wiki/Mickey_Spillane

His full name was Frank Morrison Spillane, and he was a Jehovah Witness. He was born in 1918 and passed from this life in 2006. At the time of his death, of pancreatic cancer, at age 88, he was living in Murrells Inlet, South Carolina. I had vacationed there many times as well, its a beautiful place!

One last thought, and I find that after I read an author who has passed on, I wonder what he is thinking right now. He will be either in Heaven or Hell. There is no other option.  I truly hope that Mickey Spillane went into eternity knowing Jesus as His Savior.

An interesting tidbit, the book is dedicated “To Sid Graedon.”who saw the charred edges.”

Sid Graedon was a publicity and marketing executive at Spillane’s paperback publisher, and a close friend. Mickey often gave his manuscripts and proofs to him.

I really appreciate the craft of Mickey Spillane.