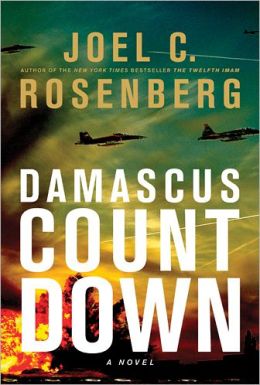 I have to say thanks once again, to my friend Leslie, who introduced me to this wonderful author back in 2009. The first book of his I ever read, was “The Last Jihad.” I guess that ever since I began reading Christian fiction over 17 or so years ago, (I began with Frank Peretti , “This Present Darkness,”) I have felt like the Lord was using it as as a way to let us know what He is planning. Let’s face it, we are so divided in different denominations, and monickers,  that we rarely listen to the same teachers…but Christian fiction crosses those boundaries, allowing us to get different viewpoints, without compromising our commitments to our particular denominations. I’m Pentecostal!

Each of these books chronicles the Biblical last days events that will be unfolding in the Middle East. Yes, they are fiction, but I think this is because they haven’t happened yet. If Noah would have written a book about why he was building an ark, then his contemporaries would have called it a fictional work as well….until it started to rain

As you read Joel Rosenberg’s books, and then flip on CNN Headline, or Fox News,  then you too will see the beginning raindrops.

Within the 465 pages of “Damascus Countdown,” published by Tyndale House Publishers, Israel has launched a first strike on Iran, and taking out six of their nuclear warheads. The US prepares to condemn this attack, and the Twelfth Imam is planning a horrific retaliation.

When CIA agent David Shirazi learns that there are more Iranian nuclear warheads, he and his team race to find them in order to neutralize them, but find that the danger is not limited to Iran, but also the governments of other Mideastern countries, Pakistan and Syria.

The author, Joel Rosenberg, born in 1967,  is a born again Jewish believer, who accepted Christ when he was 17 years old. At one time he worked for Rush Limbaugh as a research assistant, and in the past has worked on US presidential campaigns, and as a consultant for Benjamin Netanyahu. I firmly believe that he has been raised up for “such a time as this.”

The word “dispensationalism” comes to mind when I think of Joel Rosenberg’s novels, and I guess that I would fall in this category as well. Dispensationalism as Wikipedia defines it, is an evangelical, futurist, Biblical interpretation that says that God has and continues to relate to us, (human beings) in different ways under the different Biblical covenants, during periods in history,  which are known as dispensations.

We believe that we of the Christian church, are in a sense, distinct from Israel, and there will be a pre-tribulation rapture, after which God will fulfill all of His promises to the nation of Israel.

Whether or not you believe this way, may be one of the most crucial decisions of your life.  Give yourself the opportunity to examine what you believe with regard to this., and if you are like most of us, the events as outlined in Scripture, of the “last days,” are difficult to grasp. Joel Rosenberg’s novels  will help you. He is truly, I believe a gift of the Lord to us in these times, that we might know what is to come.

Read Joel Rosenberg, in fact, read all of his books. You will never see the end times the same way again, and Headline News will make sense in a way that it never has for you. It will also help you understand what the Bible is saying. If you are like me, I need all the help I can get.

This entry was posted in fiction and tagged dispensationalism, prophecy. Bookmark the permalink.