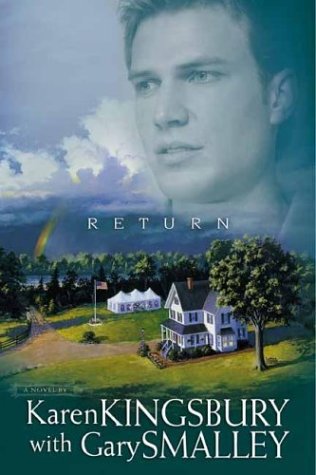 There is an old saying, “You are what you eat.” I think another equally viable statement would be, “You are what you READ.” I know that at least it is for me. Again, on one of my bi-weekly sojourns to my favorite hunting grounds, my local library, I came upon a treasure, or rather treasures.  I found three paperback books, (which are only $.10 apiece,) “Return,” “Rejoice,” and “Reunion,” written by Christian author Karen Kingsbury with Gary Smalley.  These were the last three books of a five book series, called “The Redemption Series.” They were a series of books written about the Baxter family, and the trials and joys that are faced by this family, which are not unlike what we also face. The first two are entitled, “Redemption,” and “Remember.”

I wish that I could have gotten all five, but believe me that even the one would have been worth it.  It really helped me to focus again, and having spent my past few reads in the secular, I didn’t realize how much I had missed Christian fiction, and writers, and how important they are to my own personal journey in Christ.  As I read “Return,” I easily was caught up on the story of the series, ( a real characteristic of a good author,) I immediately felt welcome, and got to know the characters as friends, (imaginary I guess, how strange huh?,) and found a resting place.

No more fighting through bad language, that I tried to read on through, or descriptions of intimate encounters that left me feeling so guilty for reading through them, (or skipping them hoping that I wouldn’t get lost in the story.)  Then, I began to justify, saying that it was just a story, and found myself becoming desensitized.  This helps me to see how easy it is for us, especially as Christians, to be subtlety lead right off the path of righteousness, until we look up and realize that we can no longer see Christ before us, that we might follow Him. Whew!!!! Glad I was able to see this before I had wandered too far off.

I am so glad back home in my favorite reading genre. Thank you Karen and Gary! I will be more careful in the future, I promise. There are many good classics out there that I want to read, and many are wonderfully and very tastefully written. It just took a good Christian author to help me see again. Christ really does restore our sight!

Book no. three, “Return,” (copyright 2003, by Tyndale House Publishers, 363 pages, ) where I have begun my journey, is mostly about a young man in college named, Luke Baxter. Luke was the family golden boy, raised in a good Christian atmosphere, and a faithful dependable son. Incidentally, the Baxters,  (John and Elizabeth,)  also have four daughters, Brooke, Ashley, Kari, and Erin.

This is the story of the prodigal son. And it is a good one, interwoven with many surprises. The events of 9-11 have impacted the Baxter family, and caused much questioning and challenges to their faith. Luke has gone off to college, and gotten involved in “free-thinking” with his girl friend, but is about to learn some news that will change things for him drastically. In addition to Luke’s situation, there are several “sub-plots” developing with the other family members, so be ready to find yourself immersed in a true to life family, who share the same struggles that you and I do.  Life lessons abound in this book, but that’s all I want to say.  I don’t want to give too much away, even though the books have been around for awhile, because to me, the best part of reading a good book is the discovery, and surprises!

All I can say is that Karen Kingsbury is a wonderful writer, and has been a blessing to me. She truly has Christ’s hand upon her, and has advanced the Kingdom mightily.  Here is her website, please take time to visit, and learn more about this author.

Here is Luke’s first appearance in the first chapter, a son that has left his family, and is away from home in college. He is in class, but his thoughts are not in the same place:

His past had sprouted legs and was chasing him. That had to be it. Luke had no other way to describe the breathless anxiety marking so much of his time. Sometimes he could almost hear footsteps pounding the ground behind him, and on days like that he would even turn around. As though he might see a person or a being, whatever was after him. But no one was ever there.

In the  back of “Return,” is where Gary Smalley has provided a guide as to the practical applications of the things that you may have learned from this book.  Gary is an expert on marriage and relationships. I have read his books in the past, and he has been a blessing to me and my family as well.   You know, Karen Kingsbury is probably considered a writer mostly for women, but I believe that we fellows had better wise up, and get to know some of these women authors, that our better halves are reading. Remember, knowledge is power!!! (The power to be the best husband or boyfriend that you can be that is!)

If I had to sum up this book in one word, it would be “HEALING.” Read the “Redemption” series books by Karen Kingsbury.