The Moneyman by Thomas B. Costain 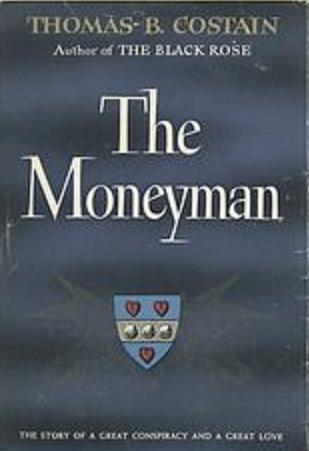 I must be one of the most blessed people in all the world, when it comes to acquiring great reads very inexpensively. It’s either this, or I have in my community one of the most gracious public libraries ever, as they are so willing to offer such treasures as this, “The Moneyman” by Thomas B. Costain, for the one quarter the cost of a cup of coffee.  Speaking of coffee, I’ve found that there are very few ways to enjoy a good cup ‘o joe, than sipping it with a great book, like “The Moneyman,”  a fantastic historical novel, penned by an unparalleled historical fiction writer, Thomas B. Costain.

I first became acquainted with this author, in the home of my beloved grandparents, David and Stella Burns, on 21st Street in Huntington, WV, when I was a young boy. The book was “The Silver Chalice,” which I’ve reviewed in the past, (see my posting on 12/14/13.) What an incredible book! I am saddened by the fact that I realize that most of the young people today, will never know these authors, from this great literary time.  I know we have many good authors now, I guess it’s just that I came from another generation…or at least am connected to it by my memories. Here is a photo of the author:

Thomas Costain surely doesn’t disappoint with this novel, “The Moneyman.” It is a fictionally prepared account of a very real and famous historical figure, Jacques Couer, the “moneyman” of King Charles VII, the King of France in the 15th century. The real term for this position is argentierthe steward of the royal expenditure and official court banker. He also oversaw the tax collection. He was the son of a furrier in Borges, France, and the most successful business man of his time. He can be compared to such contemporaries as Donald Trump, or more likely the Bill Gates of his day. He was, in fact,  the richest man in the world at that time.  Here is a 19th Century engraving that depicts Jacques Couer: 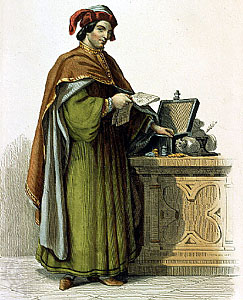 That being said, the author of this great novel, has interwoven this very historical tale of Couer, with well spun fictional threads, leaving the key facts and elements intact, while offering a very engaging story.  It was really a pleasure to read, and I looked forward to every available moment that I had to spend in this book.  It appears that my copy is a first edition, copyright 1947, 434 pages, and published by Doubleday & Company.

The author has also provided a very explanatory introduction in the front of the book, explaining his intentions, and again assuring the accuracy of what the reader is about to feast on.

Here is a favored passage, where Jacques Couer has fallen out of favor with the king, and is being set up by his enemies, over a false accusation that he was responsible for the death of the king’s mistress, the unparallelled and beautiful Agnes Sorel. His home and office have been ransacked, by those seeking opportunity to do him harm:

“Now that the blow had fallen, Jacques Coeur felt a deep sadness but no anger. His mind went back to the past. He thought of his first shop at Bourges , of his first visits to the East, and of the series of inspirations which had lead to his dominance. That he had become the riches man in the world, and had paid for a war out of his own purse were no longer important. What he was thinking of, as he stood there outside his locked door, a discarded minister of the Crown, was his vision of a different and better world which he had hoped to see in his own lifetime.

‘If they tear down what I have done,’ he said, aloud, ‘men will soon forget what I’ve taught them.'”

Writing like this is so rare today. Thomas Costain’s command of the language is an honor to read.

What I saw in this portrayal of Jacques Couer, was a man of great humility, who truly loved his fellow man.  As I looked into other historical accounts of him, I saw the same thing. In fact, when he died, his marking stone, contained no accounts of the high offices he had held in his life, nor his great deeds.  Jacques Couer was almost single handed responsible for the restoration of France in the 15th century, and as aptly spoken in “Under the Golden Lillies,” a book about great men and women of France, by John Allyne Gade, he writes, “Jacques Couer was filled with a new spirit of a new age.”

The reminds me so much of the great things that those who are filled with the Holy Spirit can also accomplish. So many inferences to the respect that  Jacques Couer had for the church, have led me to think that he may have leaned toward Christ. I hope so, for he truly knew the meaning of sacrifice, and brotherly love.

It is a very inspiring work. Please read it in your lifetime. Again, I am so grateful to my Lord for giving me a grandfather who introduced me to such great authors.

This entry was posted in fiction and tagged The Moneyman, Thomas B. Costain. Bookmark the permalink.