The Flowering by Agnes Sligh Turnbull

Posted on September 21, 2013 by theotherbrother 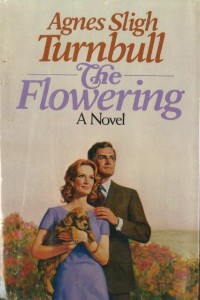 I can never thank my local library enough for their regular cleaning out of old books, and selling them to folks like me. The other day, the little old lady at the desk…(she’s really not old, but she is little,) said to me, “You are one of our best customers!!!!” as I was picking up my weekly stack of  books for which I paid no more than $2.00 for. I think I have an addiction to books. I have them in the trunk of my car, in my garage, in my den, at work, in other’s offices. I just can’t pass up a good deal.

One of the best deals I ever made was reading Agnes Sligh Turnbull. Her writing style is one of the most relaxing I have ever enjoyed. Her books are full of normalcy, “NORMALCY?” Yes, just plain people living out their lives, and her book, “The Flowering” is no exception.

“The Flowering,” introduced me to Hester Carr, a widow, who had lived a very uneventful life with her departed spouse. Oh, he had been a good provider no doubt, but their lives together lacked excitement. She, along with her live in housekeeper, Hattie, just plodded through their days, in this suburb known as Westbrook, where, “men in white shirts took the wheezy train each morning to reach their work in the city.” Hester had friends and varied interests, she owned a cocker spaniel, and enjoyed music, but all in all, it was pretty mundane…until John Justin, a professor on college sabbatical,  moves into their quiet suburb. Then, “The Flowering” begins to bloom, with multiple plots, and the advent of another neighboring community, Sackville, coming into view. Sackville, was the troubled and impoverished old mining town, whose only existence was to serve Westbrook. The women worked as maids, and the men grudgingly as tradesmen.

There was no hope for the young people of Sackville, until John and Hester hatch a plan, a plan that would set the upper crust of Westbrook into a frenzy.

One of my favorite sections, is where John Justin is trying to secure an auditorium for the a performance by the young people of Sackville, whom he has been working with. The Westbrook schools have  just turned him down, so now he is heading for Parish Hall of St. Paul’s Episcopal church  to see if their loving arms may be open:

“There remained but one more, which he had left to the last, because it was unrelated to the general scholastic area. This was the Parish Hall of St. Paul’s Episcopal Church.  In size and acoustics, it would be perfect.  It even already had a stage! But the fact that Sackville had little dealings with religion in general, and with its one small dilapidated church in particular, made it seem to Justin almost too presumptuous to ask such a big favor of St. Paul’s.  He attended service there with Hester occasionally, and had many chats with the rector, Dr. Howard, whom he liked.  After all, if there was a moral obligation connected with his plan, St. Paul’s should be the one to accept it. He pondered this as he decided to put his courage to the test at once, rather than have the torture of uncertain waiting.”

Now, I will share the rector’s response to his request:

“Mr. Justin,” he said, ” I know all this. As you’ve probably heard, the plan leaked out ten days ago. People have been quietly, or not so quietly talking about it ever since. I’m in the worst spot of all. With all my heart I want to lend you our Parish Hall, but every member of my church and the vestry are bitterly against it. You see, they’re still worried and scared about that affair of the Quinn girl, and that Sackville boy.  If the Sackville children come here, don’t you see, our young people will certainly come out of curiosity. They will all mingle after the program-“

They will mingle after the program…oh how much is that like our churches today, keeping only to “their kind,” and not willing to make it easy for others of lesser circumstance to enter, or be made to feel welcome?

I heard it once said, that the world needs more Christian writers, but I have also felt that the world needed more writers that are Christians.  Although, I didn’t find any references anywhere to her faith, I firmly believe that she was indeed, a writer who did honor the Lord.  I would have liked to known Ms. Turnbull.

She is also known for one quote that I found online, and oddly enough it comes from this very book. Ms. Turnbull was a dog lover, and on page 69, as Hester is feeding her cocker spaniel “Flushie” part of her sandwich, (she is on a picnic with John Justin,) she remarks, “Dogs’ lives are too short. there only fault really.”

God bless you Mrs. Agnes Sligh Turnbull, and thank you for many hours of reading pleasure! 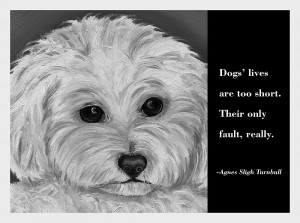 This entry was posted in fiction and tagged Agnes Sligh Turnbull, The Flowering. Bookmark the permalink.